Praying "in the Spirit": Puritan Style 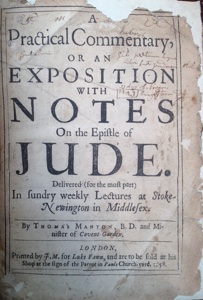 Many young evangelicals today are on the "Geneva" or "Westminster Trail." Going out from the comforts of such evangelical churches is difficult and a great unknown. One unknown area is what churches in the Reformed tradition believe about the relationship between the Holy Spirit and prayer. Back at the 2010 Ligonier West Coast Conference I had the privilege of discussing my journey. This led to some wonderful conversations with some Assemblies of God brothers in attendance about the work of the Holy Spirit. In the end, I pointed them in the direction of the Puritans such as John Owen as a magnificent example of the depth of teaching in our tradition on the Holy Spirit. In a word, we are not afraid of him, but we have close communion with him.
One perennial passage Pentecostals (formerly being one myself) turn to as evidence of their belief and practice is Jude 20. In the King Jimmy it says, “But ye, beloved, building up yourselves on your most holy faith, praying in the Holy Ghost.” Although John Owen did not exposit this passage (as far as I can tell), one of his contemporaries did. In his A Practical Commentary; or An Exposition with Notes on the Epistle of Jude, Thomas Manton gave a clear exposition (Manton, Works 5:334–341). According to Manton, the importance of praying “in the Holy Ghost” was that “God will own nothing in prayer but what cometh from his Spirit; any other voice is strange and barbarous to him” (Manton, Works 5:336). This was a common Puritan theme, which John Owen also expressed in these words: “It is the language of faith and love alone, and the like graces of his Spirit, that God hears in his worship. Other voices, cries, and noises he regards not; yea, at least, if not some of them in themselves, yet all of them when these are wanting, are an abomination unto him” (Owen, Works 9:74). In sum, since prayer in the Spirit is the only kind of prayer God receives, believers need to offer it. Yet Manton went on to say that it is “a work too hard for us.” This is why believers need the Holy Spirit: “we can babble of ourselves, but we cannot pray without the Holy Ghost; we can put words into prayer, but it is the Spirit puts affections, without which it is but a little cold prattle and spiritless talk” (Manton, Works 5:337).
Manton went on to explain this Spirit-filled prayer in some detail in terms of what the Christian was given by the Spirit in Christ in contrast with what mankind lost in Adam. Adam “maimed” humanity in terms of God’s gifts and graces. Because of this, and in order that believers’ prayers “may be answerable, the Spirit bestoweth upon us the gift of prayer” (Manton, Works 5:337–338). These gifts were both extraordinary in the days of the apostles as well as ordinary now in the lives of all believers. Of these ordinary gifts in relation to prayer, Manton described them as “special dexterity whereby men are able to put their meaning into apt words.” As ordinary gifts, the Holy Spirit uses the ordinary means of the lives of Christians to bring them about: hearing, reading, and meditating upon the Word, as well as conference with believers and other ordinary habits (Manton, Works 5:338).
Finally, Manton detailed how the gracious work of the Holy Spirit in prayer was either habitual or actual. The habitual assistance of the Spirit was his work whereby he implanted a new habitus into his new creatures that they might pray to him as they ought; a duty they could not perform previously. He “createth and preserveth these gracious habits in the soul, and doth excite the soul to act, and doth assist it in acting according to them” (Manton, Works 5:233; cf. 12:235). This habitus he described elsewhere as “the renewed soul” that was “the proper inward and vital principle” of all the new actions of believers (Manton, Works 5:232). Manton’s concern, though, was with the actual assistance of the Spirit, saying that although believers are regenerated and have a new habitus of prayer, they still needed to be “moved and assisted by the Holy Ghost” (Manton, Works 5:339). His movement of the believer was in terms of the time of prayer, the matter of prayer, as well as the manner of prayer in affection, confidence, and reverence (Manton, Works 5:339–340).
In a word, praying "in the Spirit" for Puritans such as Manton, meant that the child of God prayed because the Spirit of God gave him the ability to pray and to do so in complete reliance upon the Spirit himself. It's relationship more than experience.
Share on Facebook Tweet Widget