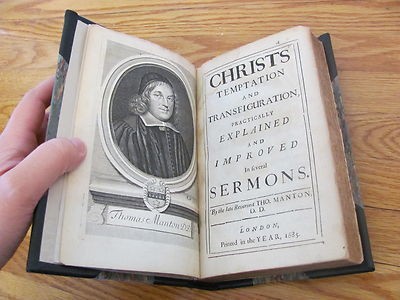 Thomas Manton (1620–1677) was called "the king of preachers" at his funeral. Anyone that has ever used his expositions of James or Jude for their sermon preparation knows this to be true. He is consistently deep, thorough, and memorable in his exposition of Scripture. All told, his Works comprise twenty-two volumes and over 10,500 pages, most of which are sermons. These reprinted volumes are available online via Google Books.

Among his expositions of Scripture are "Christ's Temptation and Transfiguration Practically Explained and Improved in Several Sermons” (Volume 1 , pages 258–336). This is a series of seven sermons through Matthew 4:1-11 that are full of Christology and practical piety. I'd like to lead you through them in the weeks to come. So grab volume 1 of Manton's Works or click on the GoogleBooks link above.

Sermon 1 is on Matthew 4:1: "Then was Jesus led up of the Spirit into the wilderness to be tempted of the devil." As you read, notice how Manton followed the classic Puritan "plain style" of preaching, opening with the "scope" or focus of the text (on this see Richard A. Muller, Post-Reformation Reformed Dogmatics, 2:206-223), structuring his sermon along the lines of the text itself, deriving doctrines, and offering uses of those doctrines for his hearers' souls' sake (on this method see Bob McKelvey's post, "Puritan Preaching: The Art of Prophesying").

If you've not read "Puritan" writings before, I hope one thing that sticks out to you is just how much this sermon is full of biblical imagery. I know that's one of the things that impressed me most when I picked up my first copy of John Owen and later men like Manton. And then this saturation of biblical imagery leads to explaining doctrine which ultimately leads to our comfort. Listen to this line as Manton expounded the lesson that temptations come not by chance but from God himself: "If tempted, when we are in Satan's hand, remember Satan is in God's hand" (Works 1, 259). Beautiful! Sounds like the famous line attributed to Martin Luther: "The devil is God's devil."

In expositing the point that Christ's temptation occurred immediately before he entered his prophetical office and minsitry, Manton offerd the following lesson: "Experience of temptations fits for the ministry" (Works 1, 261). Manton did not merely moralilze this principle out of thin air to perk up his congregations' attention, but he derived it from the Christology of the text itself. His point was that we as ministers are prepared for the ministry just as Christ was prepared for his prophetic office by means of temptation. Why? What was the purpose of Christ's being tempted first, and congruously, what is our purpose in undergoing temptations? God's purpose for Christ as for us was "for the recovery of poor souls out of their bondage into the liberty of the children of God" (Works 1, 261). In a word, Christ was tempted that he might help those who are tempted (Heb. 2).

And the same is true of us as ministers of the gospel. We cannot help those in bondage to sin unless we ourselves know what it is to be filthy, depraved sinners who constantly feel the Devil's breath upon the back of our necks. Manton went on to say that God gave his Son to temptation by the Devil that "he should experimentally feel the power of the tempter" that assaults and endangers our souls (Works 1, 261). Have we as ministers come to grips with just how depraved our sinful nature is? Are we in a constant and conscious war with Satan? We must for we minister best what we know and need ourselves. As Manton concluded:

Ministers should not only be men of science, but of experience.