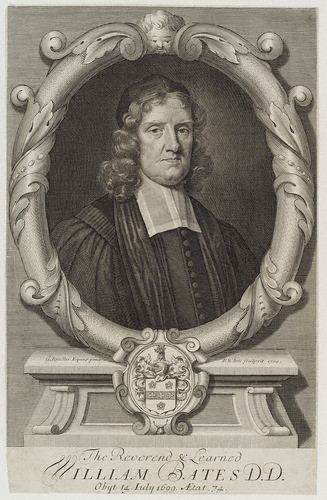 William Bates (1625–1699)
Life
William Bates was one of the most popular and esteemed preachers among the Nonconformists. A master of the Puritan "plain style" of preaching, his stress on piety earned him the name “silver-tongued.” He graduated from Queen’s College with a B.A. in 1645 and a M.A. in 1648. The following year he became vicar of Tottenham, Middlesex, and a few years later succeeded William Strong as vicar of St. Dunstan-in-the West. Like other Puritans, Bates often lectured at the famous morning exercises at Cripplegate Church.
According to Richard Baxter, Bates played a major role in negotiating for the restoration of Charles II. As a reward, he was appointed royal chaplain in 1660. That same year he was appointed as a commissioner for the approbation of ministers by the Rump Parliament and was given a doctorate in divinity from Cambridge University by royal mandate. The following year he represented the Presbyterians as a commissioner at the Savoy Conference, of which one purpose was to review public liturgy.
In 1662, Bates was one of 2,000 ministers ejected by the Act of Uniformity. Yet he did not take offense. In his farewell sermon to the St. Dunstan’s church, he made no mention of the coming ejections, other than to say rather mildly in his conclusion that his Nonconformity was motivated only by his fear of offending God. He then added, “If it be my unhappiness to be in an error, surely men will have no reason to be angry with me in this world, and I hope God will pardon me in the next” (Oxford Dictionary of National Biography, 4:327). Bates labored for the next ten years in a variety of ways, often with men like Thomas Manton, Edmund Calamy, Richard Baxter, for the inclusion of Nonconformists within the Anglican church and for toleration of other churches. On two occasions, he addressed William III and Mary on behalf of his fellow Nonconformists. After his ejection, Bates often preached in the vicinity of St. Dunstan’s, most commonly at the house of the countess of Exeter and in a room over Temple Bar Gate, beside his old church. From 1669 onward he apparently served as one of the lecturers at a dissenting congregation at Hackney. In 1672, he was licensed as a Presbyterian teacher and was appointed to lecture at Pinner’s Hall (later called the Ancient Merchants lecture). When Daniel Williams was expelled from this lectureship in 1694, Bates surrendered his lectureship as well and founded the Salters Hall lecture, where he drew large crowds. Bates remained a leading Puritan until the end of his life in 1699, often being invited to preach at the funerals of close Puritan friends, including Richard Baxter, Thomas Manton, Thomas Jacomb, and David Clarkson.
Works
The Complete Works of William Bates. Bates’s writings were first collected in a 1700 and in 1815 they were printed in four volumes. All of Bates’s writings convey good scholarship, wide reading, and careful writing. John Howe called Bates a “devourer of books,” and one who yearned to study about God and set forth His love and mercy: “Into what transports of admiration and love of God, have I seen him break forth,” Howe said (Works of Bates, 1:xviii). Bates' works are succinctly written and packed with edifying material. If you are looking for a Puritan who always writes well, is both practical and heavenly, and is never tedious, purchase Bates’s Works.

In 2011 Danny Hyde did a 5-part mid-week teaching through Bates' treatise, The Divinity of the Christian Religion. You can download the audio and .pdf outlines here.