Here are four key reasons that the ascension of Christ is essential to our understanding of the gospel:

First, the ascension is Jesus going back up into heaven in a glorified body. The ascension of Jesus is not just “Jesus going back to where he came from.” In fact, his entrance into heaven is His entrance into heaven in His resurrected glorified body. While the eternal Son of God dwelled with God from all eternity past, this is the first time that the Son of God entered the presence of God in his incarnate state. He died, he rose again, and now he enters heaven in the risen glorified state. He is crowned with human glory and honor (Heb. 2:6-9) and dwells in God’s presence. The Son of God now as the One who is also completely truly human is in heaven. This is advancement of the redemptive purpose of God. In fact, Jesus goes into God’s presence as our forerunner (Heb. 6:20). He is the advance guard climbing up into heaven, tethered to those he represents so that they will assuredly follow because they are tied to him. He went in as the pioneer, the trailblazer who has laid the course.

Second, the ascension is Jesus’ royal enthronement. If we read Acts 2 as well as Hebrews 1 and 2, the ascension is the fulfillment of Ps. 2:6-7; 8:6-8; and 110:1. God has taken the royal heir of David and set him on the throne in heaven itself at his own right hand. This makes him the highest king of the earth, the royal firstborn inheritor (Ps. 89:27). Key Davidic promises are fulfilled in the ascension. It is not David who ascends into heaven, but the son of David, the Messiah (Acts 2:33-35). Consider the words of Ps. 2:6-7:

Third, the ascension is Jesus’ priestly procession into God’s presence. Jesus Christ paid the price of redemption on the cross. The wrath of God was poured out for sin onto Jesus was He suffered and died. The payment act is finished with the death of Christ, there remains no more death for the Son. However, if we understand Leviticus 16, it was always necessary for the blood of the sacrifice to be carried into the symbol of God’s presence. The high priest went into holy of holies and sprinkled the ark, the throne of God, with the blood so that peace with God could be had.

Jesus’ ascension into heaven completed this pattern, a sacrifice is made outside of the holy of Holies, and then He ascends into God’s presence in the true Holy of Holies. Of course, for Jesus, the resurrection is between his death and his ascension. But notice how Hebrews applies the pattern to show that it is fulfilled in Christ:

Heb. 8:1-2 Now the point in what we are saying is this: we have such a high priest, one who is seated at the right hand of the throne of the Majesty in heaven, a minister in the holy places, in the true tent that the Lord set up, not man.

Heb. 9:11-12  But when Christ appeared as a high priest of the good things that have come, then through the greater and more perfect tent (not made with hands, that is, not of this creation) he entered once for all into the holy places, not by means of the blood of goats and calves but by means of his own blood, thus securing an eternal redemption.

Heb. 9:23-25 Thus it was necessary for the copies of the heavenly things to be purified with these rites, but the heavenly things themselves with better sacrifices than these. For Christ has entered, not into holy places made with hands, which are copies of the true things, but into heaven itself, now to appear in the presence of God on our behalf. Nor was it to offer himself repeatedly, as the high priest enters the holy places every year with blood not his own,

Finally, the ascension is the completion of the activity of atonement and inauguration of the New Covenant. Notice that Jesus is the priest who enters into heaven. But the focus of Hebrews is on the heavenly aspect of the offering. Just like when the tabernacle was built and then the covenant was inaugurated by Moses sprinkling blood of the items in the tabernacle, so Jesus goes into heaven and makes the way into heaven possible by his blood. Hebrews draws the connection and says of the final heavenly fulfillment in the New Covenant that “it was necessary for the copies of the heavenly things to be purified with these rites, but the heavenly things themselves with better sacrifices than these.” Christ the sacrificed lamb enters into heaven as the resurrected One appearing before God as the successful offering. But the procession into heaven is vital for the entire atonement ceremony—it is as vital as the sacrifice on the altar. Ascension is in the fulfillment of atonement. The ascension is as vital to God reconciling us to himself as the cross itself. You cannot have any value in the ascension without cross but likewise the work of the cross is not completed unless the high priest processes into heaven to apply the redemption accomplished.

Hopefully this short introduction to the ascension makes you think about the work of Christ and the effectiveness of his humiliation and exaltation. We need to always remember that the work he does he does for us. Next time you pray towards heaven, remember that you know your prayers are going up to heaven and into God’s presence because your kingly and priestly representative has ascended bodily into heaven on your behalf. He now sits in heaven and ministers for you and your salvation.

Tim Bertolet is a graduate of Lancaster Bible College and Westminster Theological Seminary.  He earned his Ph.D. from the University of Pretoria, South Africa. He is an ordained pastor in the Bible Fellowship Church. He is a husband and father of four daughters. You can follow him on Twitter @tim_bertolet. 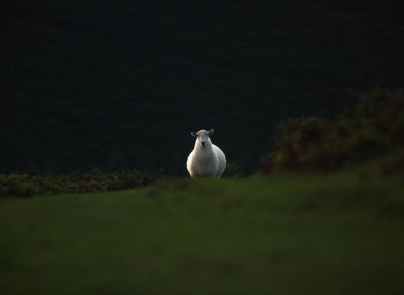