Cocceius on Doxology as the Test of Doctrine 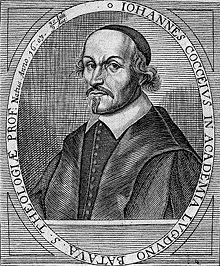 What is the true test of sound doctrine? In a previous post, I introduced readers to the recent translation of Johannes Cocceius’ work on covenant theology. In that post, I noted in passing that Cocceius argued that Romans 11:33-36 should be a test of all sound doctrine, “that it may be evident whether it is to illustrate or obscure the glory of God” (The Doctrine of the Covenant and Testament of God, 166). While doxology is not the only test of sound doctrine, this observation reflects Paul’s concern that the truth must accord with godliness (1 Tim. 6:3-6). Worship is one of the primary fruits of godliness and, as Cocceius argued in the context of this citation, the glory of God is the chief end of the covenant of grace. Cocceius can help us ask whether our theology not only includes right teaching, but holding right beliefs in the right way.

Cocceius drew nine tests for sound doctrine from Paul’s doxology in Romans 11:33-16, which in the translation of his work reads, “O the depths of the riches of the wisdom and knowledge of God. How unsearchable are His judgments and inscrutable His ways! For who has known the mind of the Lord, or who has been His counselor? Or who has given to Him, that He might repay him? Because from Him and through Him and for Him are all things. To Him be glory forever. Amen!” His nine tests of sound doctrine illustrate how he makes readers think through the text of Scripture carefully as they read him, since he developed them from nine terms found in this passage. After describing them, I will make some general observations about them.

The benefits of using a doxology such as this one as a test of sound doctrine are many. First, this reminds us that the only reason for studying theology should be ultimately to know and worship the true God and to lead others to know and worship him through sound doctrine. Second, it shows how many false doctrines violate the rights of the triune God and detract from his glory. Many readers can likely supply their own examples at this juncture. Third, Cocceius reminds us that holding to sound doctrine involves more than being right. We must ask ourselves whether our doctrine leads to doxology. Do we use what we know for the glory of God and the good of others? Does our study of theology lead us to marvel at the majesty and the beauty of the Triune God more fully? Does it make us more like Christ in godliness? While doxology cannot be a substitute for prayerful Bible study, without it we risk missing the aim for which God revealed himself to us in his Word.