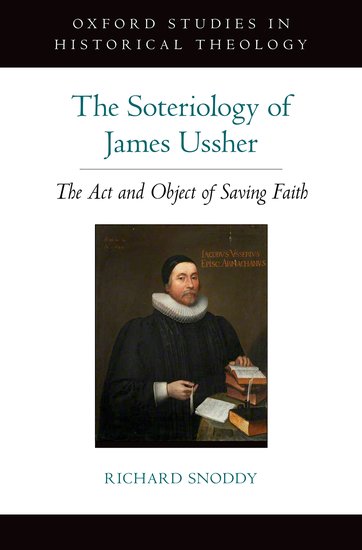 James Ussher (1581-1656) was a prominent theologian in Northern Ireland in the seventeenth-century who, until recently, has been largely neglected at present. He was archbishop of Armagh and he was invited to participate in the Westminster Assembly, though he declined due to his loyalty to the king (30). Richard Snoddy’s study of Ussher’s soteriology is one of the first attempts in recent scholarship to bring Ussher out of the shadows into the historical limelight. As readers have come to expect from this Oxford series, Snoddy’s treatment of Ussher’s soteriology is contextual sensitive, reflecting his national and international contexts. This makes this study a useful entry point into seventeenth-century trajectories of important aspects of the Reformed doctrine of salvation in Christ.
This book is both simple and thorough. The author introduces Ussher’s life and work, followed by treatments of key aspects of his soteriology. Subjects include the nature and extent of the atonement, justification by faith, sanctification, and personal assurance of salvation. One of the author’s great contributions to the study of Ussher is the fact that much of his primary source argumentation comes from Ussher’s unpublished sermon manuscripts and notes (11). This provides readers with access to material that they could not obtain elsewhere. Drawing from both Latin and English works, as well as from British and continental authors, Snoddy situates Ussher in the broader context of Reformed thought, revealing both what was common and what was peculiar about his teaching. In contrast to most Reformed authors, Ussher taught a form of hypothetical universalism, with the result that Christ died for all men and not for the elect only (78). In common with most Reformed authors, however, he affirmed that justification entailed both the forgiveness of sin and the imputation of Christ’s righteousness to believers. If anything, he strengthened this Reformed emphasis by treating forgiveness and imputation as implied in each other inseparable rather than as constituting two parts of justification (110). Such issues were filtered through the broader theme of union with Christ, which the author rightly calls “a central theme in Puritan theology and devotion” (123). The Reformed view of sanctification then flows from the broader theme of union with Christ (chapter 4). This leads finally to the question of personal assurance of salvation. The author argues that, in contrast to Calvin, Ussher believed that assurance was possible through faith exercising a reflexive act on itself and not merely toward Christ (213). Such points enable readers to grasp better the general contours of the Reformed doctrine of salvation and where Ussher fit into this broader tradition.
There are a few minor points at which the author appears to overreach his conclusions slightly. For example, he lists Bullinger, Musculus, and Ursinus among authors who leaned toward hypothetical universalism (78). This is controversial claim that requires a bit more evidence and explanation. In addition, the author notes that some Reformed writers made union with Christ the central aspect of soteriology while others preferred to exalt legal categories (122). This appears better to match contemporary debates, which Snoddy cites, than it does historical categories. A broader appeal to the standard systems of theology current in Ussher’s time could help clarify this issue. Lastly, Snoddy distinguishes between “habitual” and “habit” (156). He argues that something that was habitual referred to a disposition while a habit was acquired by repeated action. However, in the seventeenth-century, it seems better to say that there were two ways of forming a habit. The soul could already be habitually bent in the direction of sin or of righteousness, on the one hand. On the other hand, habits could be acquired through practice as well. In this way, a disposition could be strengthened through practice. In each case, further evidence could have sharpened the author’s excellent treatment of such subjects.
The author concludes that Ussher has only recently begun to receive the scholarly interest that he deserves, adding that Ussher exemplifies “the creativity of Reformed theologians in this period” as they sought to defend the sovereignty of God against increasing attacks (245). Ussher was an important theologian and soteriology is an important topic in Reformed thought. This volume is thorough and readable introduction to both.
Share on Facebook Tweet Widget