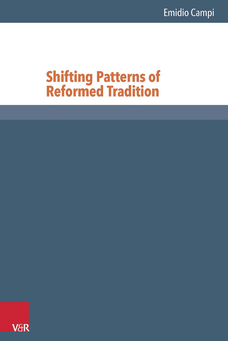 Emidio Campi's, Shifting Patterns of Reformed Tradition, Reformed Historical Theology vol. 27 (Göttingen: Vandenhoeck & Ruprecht, 2014) is an outstanding collection of essays that illustrates unity and diversity in the Reformed tradition on a wide scale. With special emphasis on Reformers such as Calvin, Bullinger, and Vermigli, Campi does not simply regurgitate the work of others (such as Richard Muller and David Steinmetz) on this subject. He uses hitherto neglected resources, such as Vermigli’s book of prayers and Beza’s correspondence with Bullinger, to show how Reformed authors interacted with one another as they sought theological unity and consensus. This book will be useful to all who desire a broad contextual study of the shaping of Reformed theology in the early orthodox period.
In my opinion, some of the best articles include the analysis of the Consensus Tigurinus, Calvin’s impact on and relation to other Swiss Reformed churches, and the influence of the conversion story of Galeazzo Caracciolo on English Puritanism. The Consensus illustrates how early Reformers such as Calvin and Bullinger were willing to debate theological issues in pursuit of theological and ecclesiastical unity. Through this process, the Consensus resulted in a large measure of uniformity in Reformed views of Christ’s presence in the Lord’s Supper for generations to come. This chapter is thought provoking and provides a model for proper theological debate and biblical ecumenicity, since Calvin (albeit unsuccessfully) continually tried to involve Lutherans in these debates. The story of Galeazzo Caracciolo is a juicy conversion story of a prominent Italian aristocrat turned Protestant who fled to Geneva. His story became a paradigmatic example of leaving all to follow Christ among English Puritans. The disturbing side of this story is that Caracciolo abandoned his wife and children to do so and that the Genevan authorities permitted him to remarry after his questionable divorce. This illustrates the fact that it is unwise to idealize any period in church history. Even our heroes often have clay feet.
All of these articles originated as conference presentations and all of them have appeared in print before. While some readers will consider this a disadvantage, others (like this reviewer) will be grateful to have these materials collected in one volume instead of lost in over a dozen multi-author works. Campi is an internationally respected scholar who is published in English, French, Italian, and German. This volume makes his valuable research accessible to English students of historical theology.
Share on Facebook Tweet Widget