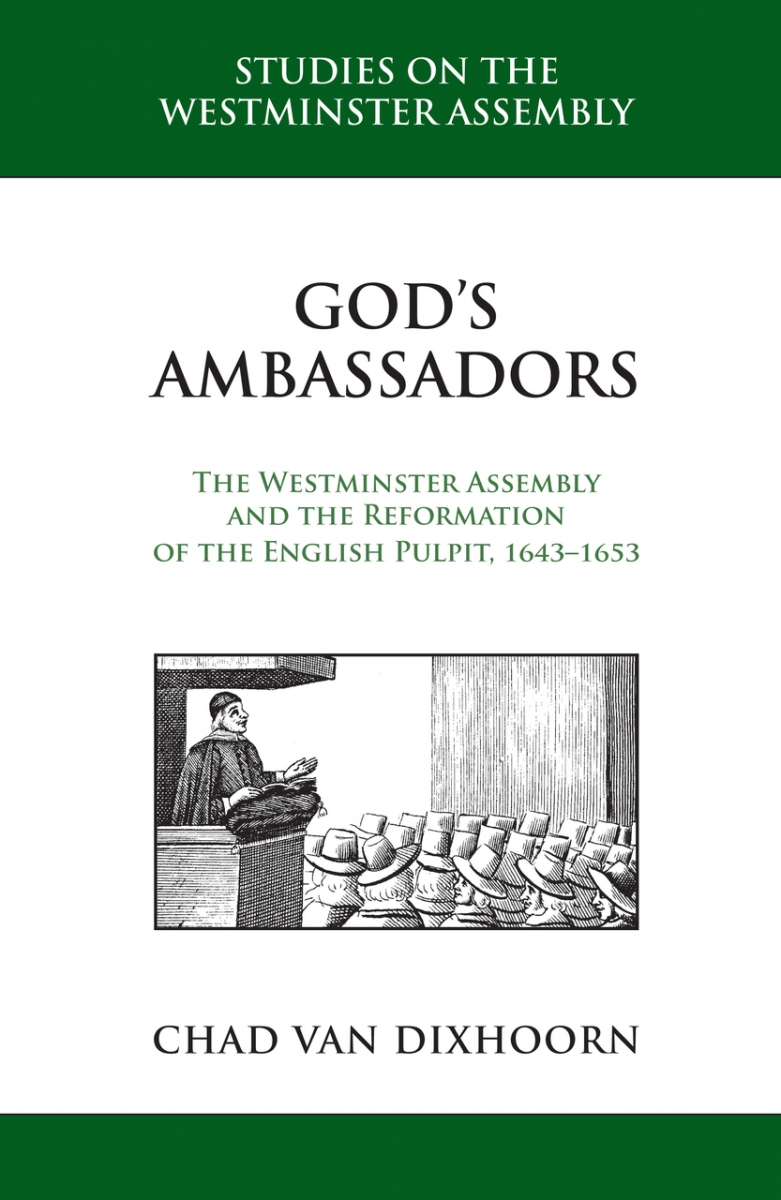 There is a growing interest in the history—and especially the theology—of the Westminster Assembly. This body produced the Westminster Confession of Faith and Larger and Shorter Catechisms, which many churches continue to love and use. Yet few may realize how much time and attention the Assembly devoted to examining ministers of the gospel and to developing the theology and practice of preaching. God’s Ambassadors introduces readers to the measures that the Westminster Assembly took to furnish the church with a “learned and godly” ministry. The author shows ably that the members of this Assembly sought to do this both in theory and in practice. This book presents groundbreaking research on a vital subject, both for those interested in historical-theological research and for those who desire to understand the historic Reformed view of preaching better.

Van Dixhoorn’s work is an important introduction to its subject. He divides his material into three sections. The first illustrates the historical context leading up to the Westminster Assembly and the dearth of sound ministers of the gospel at the time. Examining and procuring future gospel ministers was not part of the original task that Parliament assigned to the Assembly (42); yet the need to assess ministers who were ejected from their pulpits during Laudian persecution, coupled with a simultaneous need for new ministers, drew its attention in this direction. Van Dixhoorn shows how the Westminster Assembly examined every minister from 1643-1653 before each was examined by his local presbytery (50). The second section of the book highlights how the Assembly accomplished this in its day-to-day business. The third and largest section treats the theology of preaching that the Assembly developed to meet the needs of these examinations. The author illustrates their principles for preaching in light of the minutes and papers of the Assembly, the directory for preaching that they produced, and the writings of various Westminster divines. The result is a gripping introductory narrative of why and how the Westminster Assembly devoted so much attention to the subject of preaching.

This book has many virtues. The narrative itself is lively and interesting, including anecdotes such as a man having nightmares that, after hearing two long sermons, the dancing at his wedding was cancelled when the minister announced that there would be a third sermon. The historical sketch provided in the first two sections fill in many historical gaps surrounding the work of the Assembly, shedding light on its everyday work. Part three stands out for its interrelation of theological and practical questions, such as the interplay between learning and piety, the primacy of preaching in relation to the sacraments, the proper relationship between Bible reading and preaching, and especially preaching as it relates to Christ and the Holy Spirit.

In particular, chapter 11 explains the common conviction among Assembly members that ministers must preach Christ in all of their sermons. Chapter 12 compliments this material by showing the different methods that ministers recommended to accomplish this goal. Chapter 13 completes the picture by connecting the Spirit’s work directly to the content and the style of preaching. The last of these includes topics such as whether sermon manuscripts were permissible in the pulpit and how extemporaneous preachers ought to be in their sermon delivery (169).

The material on preaching Christ is particularly valuable in light of modern debates on this subject, since seventeenth-century authors approached this issue with different questions than those in the modern age. The author highlights that fact that, regardless of any discrepancies in their practices, Reformed authors believed that preaching Jesus Christ was synonymous with preaching the gospel (150), and that doing so was integral to the definition and task of preaching itself (146-147, 160). Their example can serve as a useful challenge to the church today as we wrestle with similar questions.

One last useful feature of God’s Ambassadors is that it opens avenues to pursue important underdeveloped questions. For example, how does the theory of preaching presented here comport with its continental counterparts? In addition, how consistently did the Westminster Divines and their contemporaries apply their theology of preaching in their sermons? While van Dixhoorn hints at the unity characterizing the answer to the former question (10) and the diversity that marks the answer to the latter one (99), he purposefully leaves the door open for other authors to answer them more fully. In this reviewer’s opinion, this is a strength rather than a weakness. Leaving such questions open keeps the size of this volume manageable, providing an introduction to the topic while promoting further study.

God’s Ambassadors is not simply for historians. It can be useful to all believers, since all have a vested interest in the preaching of the Word of God. The author notes as well the potential that this material has to challenge modern preachers with the necessity of building a theology of preaching:

“Changing pastoral practice may in fact collate with trends in seminary curricula, as many centers for pastoral training provide courses on gospel content and gospel communication without offering the potential preacher a pulpit theology. This in turn may explain why they are so willing to give up preaching in exchange for other means of teaching and persuasion” (180).

This is precisely the kind of challenge that is need in the church today.