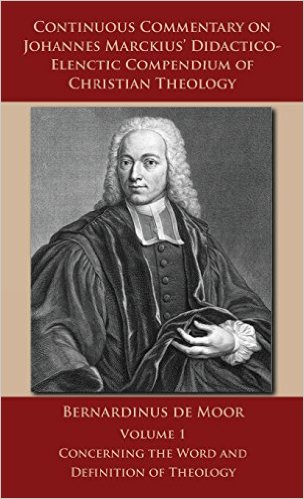 Bernardinus de Moor, Continuous Commentary on Johannes Marckius’ Didactico-Elenctic Comendium of Christian Theology, trans. Stephen Dilday, vol. 1, 7 vols. (Culpeper, VA: L & G Reformation Translation Center, 2014).
Some cities in the world today sit on the remnants of ancient civilizations. Ruins of ancient Greece and Rome, for example, stand as monuments to the foundations of modern culture. This is similar to the present state of Reformed theology, since most of the theological texts in our heritage are buried in Latin tomes inaccessible to most. In order to profit from this rich tradition, these works need to be resurrected and become a self-conscious part of English-speaking theology. Stephen Dilday’s translation of de Moor’s commentary on Marckius brings a significant piece of this literature to light for a new generation of Reformed readers. This can help bring both clarity and unity to Reformed thought as we search the Scriptures, engage in theology, and address a new generation. This review briefly treats the significance and structure of this work and its contents.
This book provides a significant window into Reformed orthodox theology. Bernardinus de Moor was a professor at Leiden University in middle of the eighteenth-century. Richard Muller has categorized this period as “late orthodoxy,” in which Reformed theology struggled to maintain its historical form and content in light of shifting philosophical developments. De Moor maintained the best emphases of the so-called Dutch second Reformation by wedding biblical Reformed theology to fervent piety and devotion. He aimed to continue the work of his mentor, Johannes Marckius (1689-1731), who was a famous late orthodox author. As the title indicates, de Moor’s textbook is a commentary on Marckius’ Compendium of Didactic and Elenctic Christian Theology. Each chapter expounds a paragraph of Marckius’ text. The translator could have improved the text by providing chapter headings, rather than forcing readers to write them in as they progress. Rather than regurgitating the work of his mentor, de Moor explained this shorter work in seven volumes with rich expositions of Scripture, ample use of the church fathers and contemporary Dutch Reformed theologians, and evident piety. Dilday provides brief biographical sketches of all authors cited in the footnotes, making this book read partly like a “who’s who” of the period of Reformed orthodoxy.
The content of de Moor’s work provides a refreshing challenge to modern approaches to the study of theology. This first volume treats the nature and definition of true theology. In contrast to post-Enlightenment Reformed theology, but in accord with the Reformed orthodox tradition, de Moor denied that theology is a science (186). He argued that if we follow Scripture, this discipline encompasses an intellectual (intelligence) bent of the mind created by the Spirit of God, the knowledge of God’s being and works (science), wisdom in knowing how to worship him and live to his glory, prudence in practicing God’s law, and art in producing benefits to the church (187). Removing obedience and piety from definitions of theology was tantamount to transforming theology into speculative philosophy (175). The end of true theology is the glory of God, with the subordinate end of man’s salvation and enjoying the triune God forever (262). He argued that God himself was the incomprehensible foundation of true theology (theologia achetypa; chapter 7) who communicates himself pre-eminently through Christ’s human nature as the pattern of theology both for angels and men (theologia ectypa; chapters 8-10). This grounded the knowledge of God in Christ’s person and effected it by his work. This makes this entire book explicitly trinitarian, since the Father reveals himself through his Son and makes us true theologians by his Spirit. This practical trinitarianism, which is often painfully absent in post-Enlightenment theology, was commonplace in Reformed Latin theology. The older Reformed emphasis on the character of the true theologian in communion with God as part of the definition of true theology is precisely what the church needs today to revive the vitality of her theology by aiming at the hearts of all who undertake its study.
De Moor’s commentary on Marckius was written for future ministers. The modern pastor needs theological precision coupled with devotional warmth in order to be clearer and more effective in the pulpit. Read de Moor as a window into our theological heritage. He may even spur some of you on to learn Latin in order to open the treasure trove of historic Reformed theology.
Share on Facebook Tweet Widget