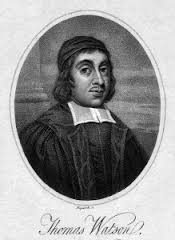 We resume our reading of the Puritan Paperback, Sermons of the Great Ejection with the first of three pieces by Anglican Thomas Watson. “The Great Ejection” was the explusion of nearly 20% of Anglican ministers from their cures in the 1662 Act of Uniformity.
Born in Yorkshire and graduate of Emmanuel College, Cambridge, Watson first held the parish lectureship for 10 years and the pastorate for another six of St. Stephen’s, Walbrook in London until the Ejection. He kept serving as a non-conforming minister in London for a number of years after ejection, including the great plague and fire, until his health failed. He then retired to Barnston in Essex where he died suddenly in 1686 while in private prayer. You can still visit his old parish of St. Stephen’s today, but Watson’s church was destroyed by the Great Fire in 1666. Watson is one of the English Reformed of the Church of England who identified with the presbyterian party. He did not support further radicalism in the execution of Charles I and was later indicted and imprisoned in lending support in a move to restore the monarchy in 1651.
When you read Watson you gain a real understanding of the divine inititative in your salvation. There is a pride-crushing but also a soul elevating in how he writes of God’s grace. To gain a fuller understanding of his English Reformed theology, today’s Anglicans would do well to consult his Body of Divinity on the Shorter Catechism of the Westminister Assembly.
Some may raise an eyebrow that I would suggest an Anglican consult the documents of the Assembly. But I am in good company. As fellow Anglican J.I. Packer has written, “My frequent quoting of the Westminster Confession may raise some eyebrows, since I am an Anglican and not a Presbyterian. But since the Confession was intended to amplify the Thirty-nine Articles, and most of its framers were Anglican clergy, and since it is something of a masterpiece, ‘the ripest fruit of Reformation creed-making’ as B. B. Warfield called it, I think I am entitled to value it as part of my Reformed Anglican heritage, and to use it as a major resource” [Concise Theology: A Guide to Historic Christian Beliefs].
The first piece from Thomas Watson is a transcription of his pastoral prayer of 8 July 1662 as the Ejection deadline drew near. He begins his pastoral prayer in praise of our communion with our heavenly Father through the Lord Jesus Christ. He declares of God: “Thou art all fulness, the quintessence of all sweetness, the centre of all blessedness.” “Quintessence” is a marvelous word! Isn’t the heart of the believer built up in the contemplation of our God’s quintessence, and doesn’t that same heart ache for more of His blessed communion? Watson affirms that our communion with God is through the purchase of Christ’s blood in the presence and influences of his Spirit in the believer. And so our heavenly Father gathers all gifts and dispenses them through the Lord Jesus. All treasures, all fullness, and the Spirit without measure, are in him.
And how fitting it is that we learn at the prayer’s conclusion that the congregation are to receive the Lord’s Supper where “…this blessed sacrament [will] be a poison to our lust and nourishment for our grace.” Watson clearly had a high view of the sacrament.
Share on Facebook Tweet Widget